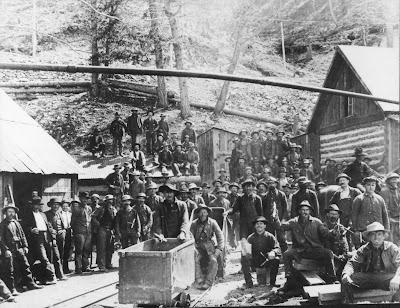 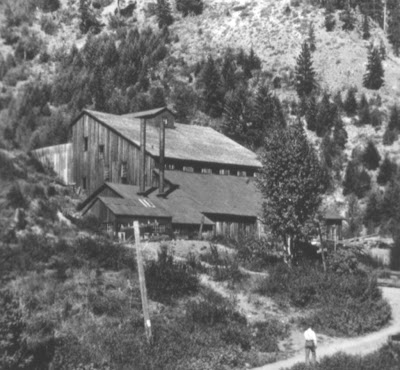 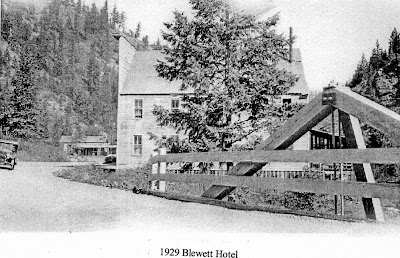 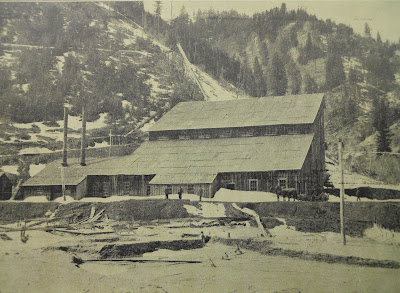 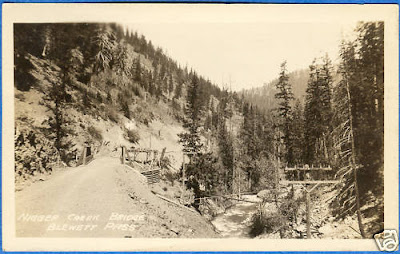 Blewett, WA. Circa 1900. Facing south. Highway US 97 would run thru the middle of this picture. 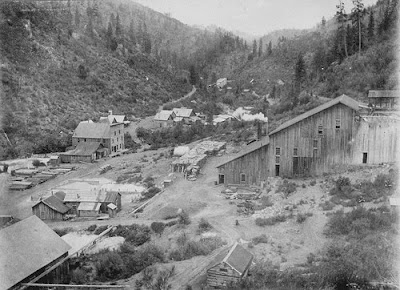 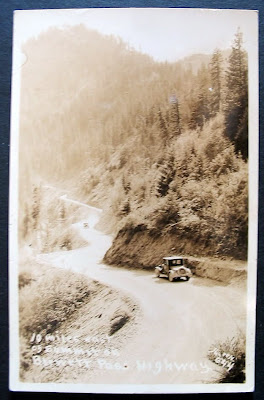 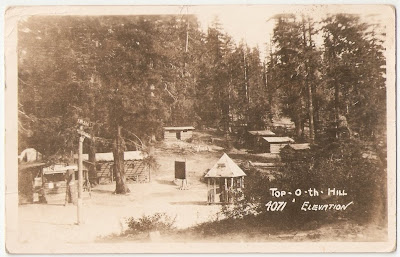 Top of the Hill Resort 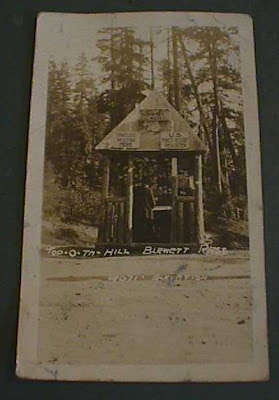 These pictures were taken from postcards and show the Top of the Hill resort that used to sit at the summit of Blewett Pass Highway. Circa 1920. I cannot read what the signs say. This place burned down shortly after these were taken. 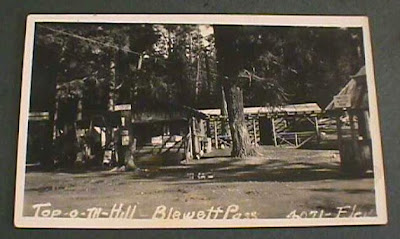 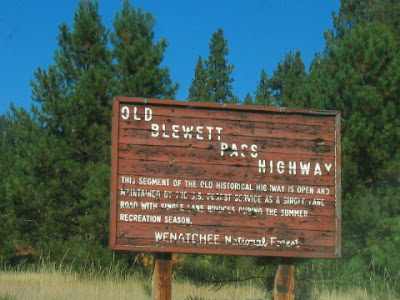 The Old Blewett Pass Highway is a mountain pass located between Interstate 90 (Cle Elum/Ellensburg) and US Highway 2 (Dryden/Leavenworth) in the State of Washington on US Highway 97. It is located in the Cascade Mountain Range.


A 13-mile section of the original highway is maintained by the US Forest Service and is open from April thru September. This remaining section includes the old summit and Echo Point. You can also see much of the old highway as it parallels the new US 97 (some of the old roadway has eroded and fallen into Peshastin Creek). There is an old dismantled bridge at the Blewett town marker site.

I drove over this section of old highway on August 13, 2008. That drive inspired me to create this site.

Area of "Rich" History
The area between Cle Elum and Leavenworth is very historical. Some of the feature attractions are: the ghost town of Liberty; the Blewett town site (directly across from this is a mining arrastra landmark); the Blewett Pass highway; Peshastin Creek and the many gold mines that remain. It is documented that Chief Joseph would water his horse and buy supplies in the town of Blewett. In the late 1800's, this area produced large amounts of gold. There is an abundance of deer, elk and other wildlife. The area is part of the Wenatchee National Forest.

The original highway began as a route for gold miners to follow over the Wenatchee Mountain range back in the 1870's. Initially, it was a series of Indian trails used by miners with pack animals to travel between the mining camps. In 1891, a wagon road was built by the miners connecting the Swauk Mining Camp to the Peshastin Mining Camp. They followed an old Indian trail and used a series of switchbacks to offset the steep grade of the mountain. This was the beginning of the road we know today as "Old Blewett Pass Road". In 1892, the Blewett Mining Co purchased a major interest in the Peshastin Mines and also assumed responsibility for the road. In 1897, a US Geological Survey was preformed to make the first map of the area. They called the wagon road over the Wenatchee Mountain Range "Blewett Pass". In 1922, the cross state Sunset Highway was rerouted over the pass. It was constructed as a 2-lane road with one-lane bridges. At this time, the bridge roadway was concrete and the roads were dirt and gravel. In 1925, the first asphalt was laid over the gravel road. In 1956, the road was realigned through Swauk pass. This marked a change in the name from Blewett Pass to Swauk Pass. The name did not, however, work with the locals as they continued to refer to the pass as Blewett Pass. In 1992, the WSDOT changed the name back to Blewett Pass.

The original highway was known for its large number of curves and switchbacks. The road was very narrow and built into the side of rugged mountainous terrain. There were many roadside signs that read "Caution" for good reason. The grade was steep and turns sharp. There were very few guard rails. The old highway had 248 curves. The original construction of the highway remains intact in many places. There is a solid white line that divides the narrow 2-lane road. This white line still is visible on the highway today. Most of the single-lane bridges have been dismantled (the approaches and abutments remain as a testament to the quality of construction that took place back in the 1920's. During this time, the majority of the work was performed by the Washington State Highway Dept. It is unclear if any convict labor was used during the initial construction phase of the highway.

In 1924, the Wenatchee Daily World reported that the final stretch of the Blewett Pass Hwy was finished and open to traffic. It stated that one million dollars had been spent by the Chelan and Kittitas Counties, the state and federal government. The largest amount had been spent by the US Forest Service because almost the entire hwy was located in the Wenatchee National Forest.

By the mid 1940's, the highway was becoming outdated. As the automobile traffic increased, the narrow curves, switchbacks and singe-lane bridges were becoming encumbrances to road travelers. The highway was also dangerous. Modernization was necessary and planning began for a newer, safer route over Blewett Pass.

In 1956, the highway was rerouted east from Blewett Pass to Swauk Pass. This resulted in a more streamline route, which reduced the number of curves from 248 down to 37. The new roadway was wider, straighter and free of the many switchbacks. With 4 lanes and shoulders vehicles could travel safer and faster. This also provided passing lanes for cars and slow moving trucks.

Both the old and new routes over Blewett Pass have been known on maps as US 97 since the 1920's, and also as "Primary State Hwy #2" until 1964. Route numbers and alignments have changed at the southern end of the route (US 97 now bypasses Cle Elum in favor of a more direct route to Ellensburg), but the popularity of the highway suggests that people have no trouble finding it.

The main creek that runs between the two highways is called Peshastin Creek. It is a tributary to the Wenatchee River.

The Sunset Highway was the main East-West route from Seattle to Spokane in the early 1920's. The road went from Lake Washington thru Renton and North Bend, over Snoqualmie Pass (on the old switchback road between Denny Creek and the summit), thru Cle Elum and over Blewett to Wenatchee. From there, it connected to Spokane. Initially, the highway was known as State Rd #7 from 1914 to 1920. In 1923, the name was changed to Primary State Hwy #2. In 1925, it was changed to US Highway 10. These frequent changes were responsible for much confusion about the name of the highway.


Frankie West Holman said: "In 1928, I was 14 years old. My Mom, brothers Knox, Morris and I came over the highway from Tumwater in a Model T. My Mom (Maye Pittman) burned out the brakes coming down the hill over Blewett. We had the brakes relined in Entiat. Because of this, we didn't have enough money for gas to get to Oroville. We ran out 4 miles short of our destination. A nice man loaned us enough gas to get to Oroville. The next day, Mom went back and paid the man."

Gordon Sinclair said: "My Grandfather would tie a log on the back of his Model T, you know, the one with the 3 pedals, when going down the pass to make sure he would have enough brake."

Kenn said: "In 1950, I remember a wide load permit from Portland to East Wenatchee that sent us over Blewett Pass.  We were hauling material for the bridge that was being built.  We were driving a long-wheelbase tractor (Kenworth) with a low boy, wide load trailer.  When we got to Echo Point, we had to stop and back up due to the sharp hairpin curve.  Upon arriving in Wenatchee, we were found to be overweight for the downtown (1908-1950) bridge.  The permit should have sent us over the (1927-1962) Vantage Bridge (now the Lyons Ferry Bridge).  Thank God the old bridge in Wenatchee did hold, dropping through it would have been a bit difficult to explain.

The Town of Blewett and the Blewett Mining Company

The town of Blewett (max population 300) was established in 1893. Initially known as "The Camp" it was changed to Warner in early 1893 when the first post office was started. A short time later in the same year, it was changed to Blewett after Edward Blewett of Seattle. He owned many of the mining claims in the area. This mining town had a reputation as one of the most disorderly and violent mining camps in Chelan County. In 1910, the gold production dropped and Blewett eventually became a "ghost town" fading into the trees. The current U.S. Highway 97 runs directly through where the town use to reside. The town was torn down when the current highway was constructed in 1956. It has been noted that the stone foundation from the stamp mill remains to this day. 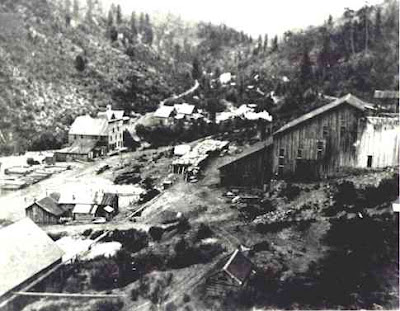 The historic marker below is one of the last reminders of the town of Blewett, WA. It is located on US 97 where the town once was. 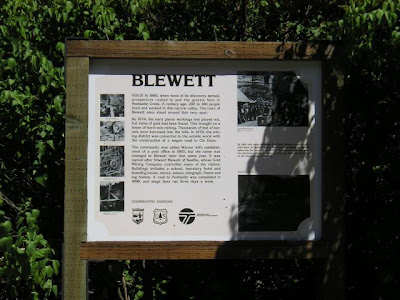 There remains a long standing feud between what the current pass should be called. The highway technically traverses Swauk Pass. In 1956, when the pass was rerouted, the name was changed from Blewett to Swauk Pass. This technicality remained dormant until 1991, when WSDOT was photographed by The Wenatchee World (newspaper) changing the sign to Swauk Pass. This caused a huge firestorm with the locals who refused to call it by it's new name. After all, the name Blewett has the history and has earned it..... RIGHT? WSDOT and the Federal Board of Geographical Names argued that for geographical accuracy, the sign needed to read: Swauk Pass. They had a point: what do you tell people who are trying to find Swauk Pass? When they find Swauk it says: Blewett Pass. Point....counterpoint. In 1992, the state and federal boards of geographical names agreed to call the original Blewett Pass "Old Blewett" and the newer (Swauk) pass would be called "Blewett Pass". WSDOT changed the sign back to Blewett in 1992.

The summit of the old pass is 4061 feet. This is approximately 4 miles west of the current Blewett/Swauk Pass summit (elevation 4102 feet). The "new" pass summit is also situated on the county line between Chelan County and Kittitas County. 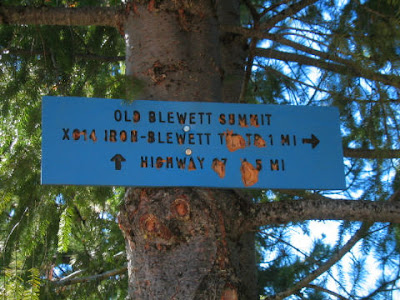 This deep U-shaped turn hasn't changed much since this photo taken way back in the day. There is a nice view from here. Echo Point is located not too far from the summit on the south side. The point is named after the Cle Elum Echo Newspaper not because of the sound reverberation. Check out the section below and see how this famous turn changed over the years. 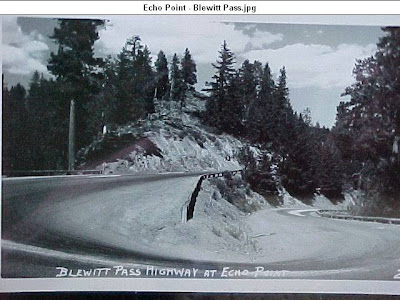 In the 1930's and 40's, a restaurant at the summit of the pass offered food and a place to rest. It was called Stu's Lunch. If you visit the old summit, you will see a clearing where this place use to stand. Before Stu's, a resort was located at the summit. Built in 1920, it was known as the Top 'O The Hill Resort (owned by Richard Simons). It was lost to a fire (year of fire unknown). 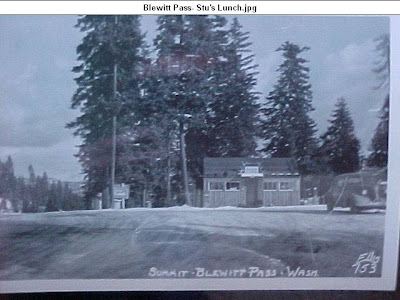 If you like this site, please donate some money to help support the continuation of this webpage. We are committed to preserving the rich history of the Blewett Pass region. Donations pay for photo and travel costs, library research and website fees. Thank you.

Dedicated to the memory of my Grandmother: Frankie (Pittman) West Holman 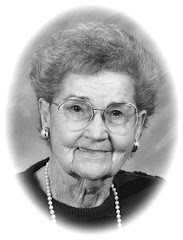 Dedicated to the memory of my Mother: Beverly Jean (West) Johnsen 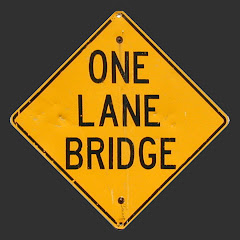 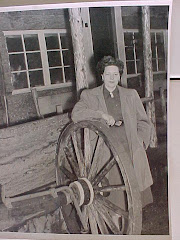 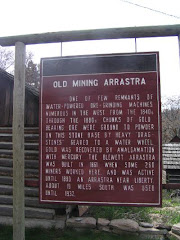 An early auto caravan on the rugged road over Blewett Pass 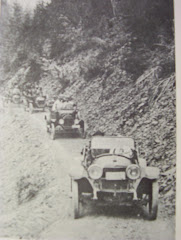 A mine on a hillside near Blewett 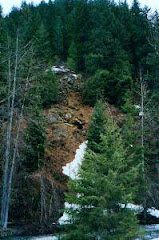 Should the historic Blewett Pass Highway be restored and preserved? 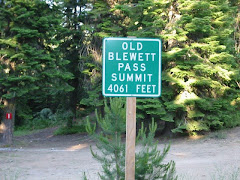 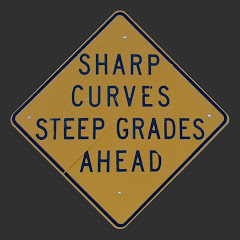 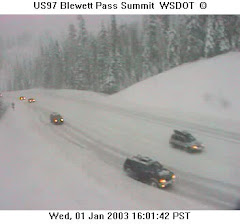 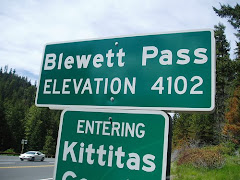 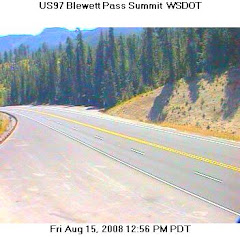 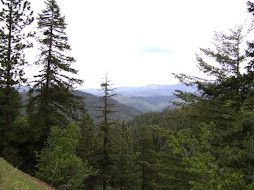 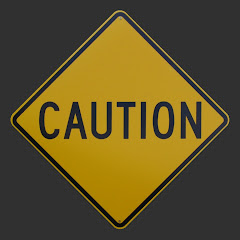 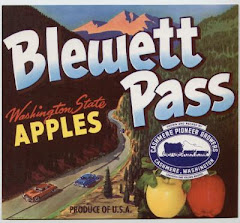 Jeff. You can email me at: rumblefish351@aim.com
* Named Portland's Best Web Historian by Willamette Week in 2016 *